Age group champions will be determined by performances at QLAC competitions in each event, each week over the full season.

Athletes need to have competed in a minimum of 50% of all events available to be eligible.

Where there are only a few athletes in an event, reduced points may be awarded.

The Participation Award goes to the athlete who competed in the most events on QLAC competition days provided they competed in at least 50% of the total number of events conducted by QLAC for the age group during the season.

This award goes to an athlete who displays good sportsmanship at all times.

This award is for the encouragement of one boy and one girl in the U6–12 age groups who competes in most events, always tries their best but is not often a winner.

This Award is given to the athlete in the U13–17 age groups who has contributed most to the club both on and off the field. Factors to be considered include participation at Queanbeyan competition and ACTLAA carnivals, particularly the Relay Carnival; being helpful and co-operative at events; providing general assistance and displaying a commitment to Little Athletics.

This award goes to an athlete in the U13–17 age groups who is seen to be consistently trying their best and displaying co-operation in the spirit of Little Athletics.

An individual athlete can only win one of the age group awards. If an athlete qualifies for more than one of these awards, precedence will be given to Age Group Champion, followed by the Achievement award. In such cases, the next eligible athlete for the second award will receive the trophy. There may be joint winners for some awards. 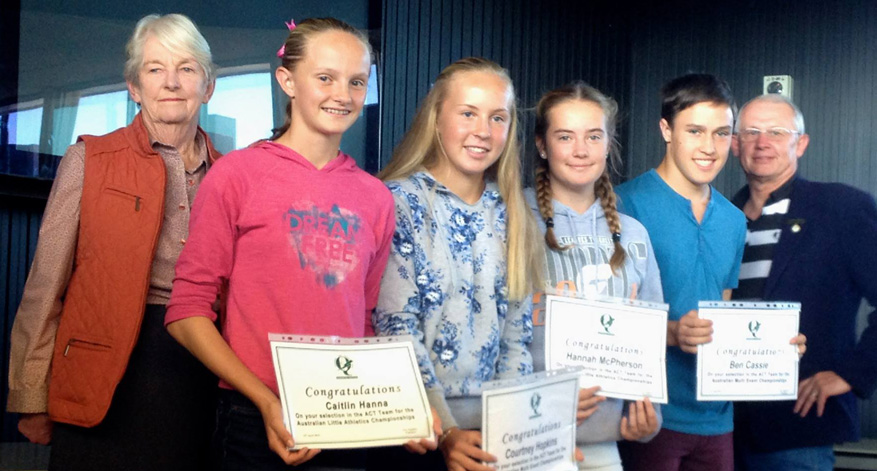 Events run faster and smoother on Saturdays with Parent Helpers. AND WE NEED HELPERS TO KEEP OUR CLUB ALIVE! Contact president@qlac.org.au
Instructions for ResultsHQ can be found by following the link on the Club Menu above. You can also click on the button below to take you straight to ResultsHQ.
New season – new PBs!
QLAC is on Facebook. View the LIVE Feed from the Facebook site here. Get Updates and News from the QLAC Facebook page. Come visit us and hit the Like button!
Weather for Saturday mornings – if in doubt, please check the QLAC Weather Widget below for confirmation on Saturday morning before 8.30am.
Uniforms are available for purchase on regular competition mornings at Wright Park. Don’t forget to sew your numbers and patches on before the next competition!
The Runners Shop gives QLAC athletes a 10% discount on all full priced shoes and a 5% discount on shoes on sale. AND a 2% rebate goes to QLAC if you nominate it in the store.